We have a wonderful surprise for you this spooky time of the year! On 28th of October, just a couple days before Halloween, we've released another new After-H update in all EVA locations. This includes two new domination maps: The Cliff and Polaris, a new laser gun: ERG Type-5, some new adjustments on the level design, and our very first special Halloween edition of the game, which is only available until the 7th of November! Keep reading for more information as we dive into the details of each update! 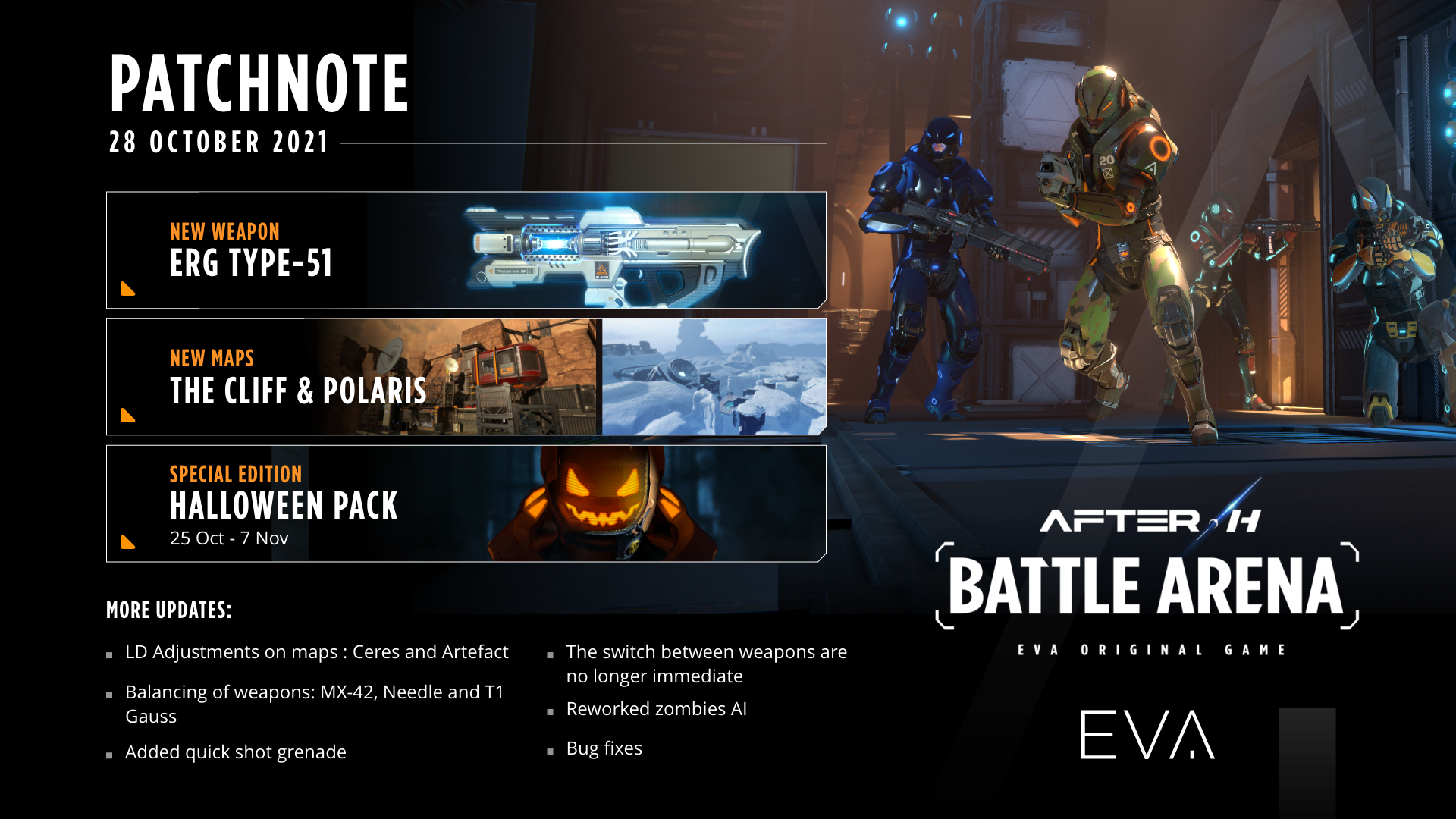 In this update, not one, but TWO new maps will be added to our existing collection of domination maps. We proudly present, The Cliff, and Polaris. THE CLIFF : A domination map focused on close combat while having higher grounds that are accessible by teleporters, allowing players to have a good strategic position in the battlefield. Players can also bypass and take their opponents by surprise through our dark corridors in the bunker along the north side of the map. The Cliff is perfect for players who love close combat and love using the T1 Gauss shotgun!

POLARIS: There are many narrow paths for players to  hide and fight in this map. Remember to make use of our teleporters as they lead to a few good sniping spots, perfect for long range weapons. The overall design of the narrow pathways were inspired by the labyrinthine to allow different strategis The various paths present give it a labyrinthine feel, allowing you to approach the map with different strategies.

Check out  where is the closest EVA to you at www.eva.gg !

A brand new weapon is now available in all game modes !

Only available until the 7th of November ! 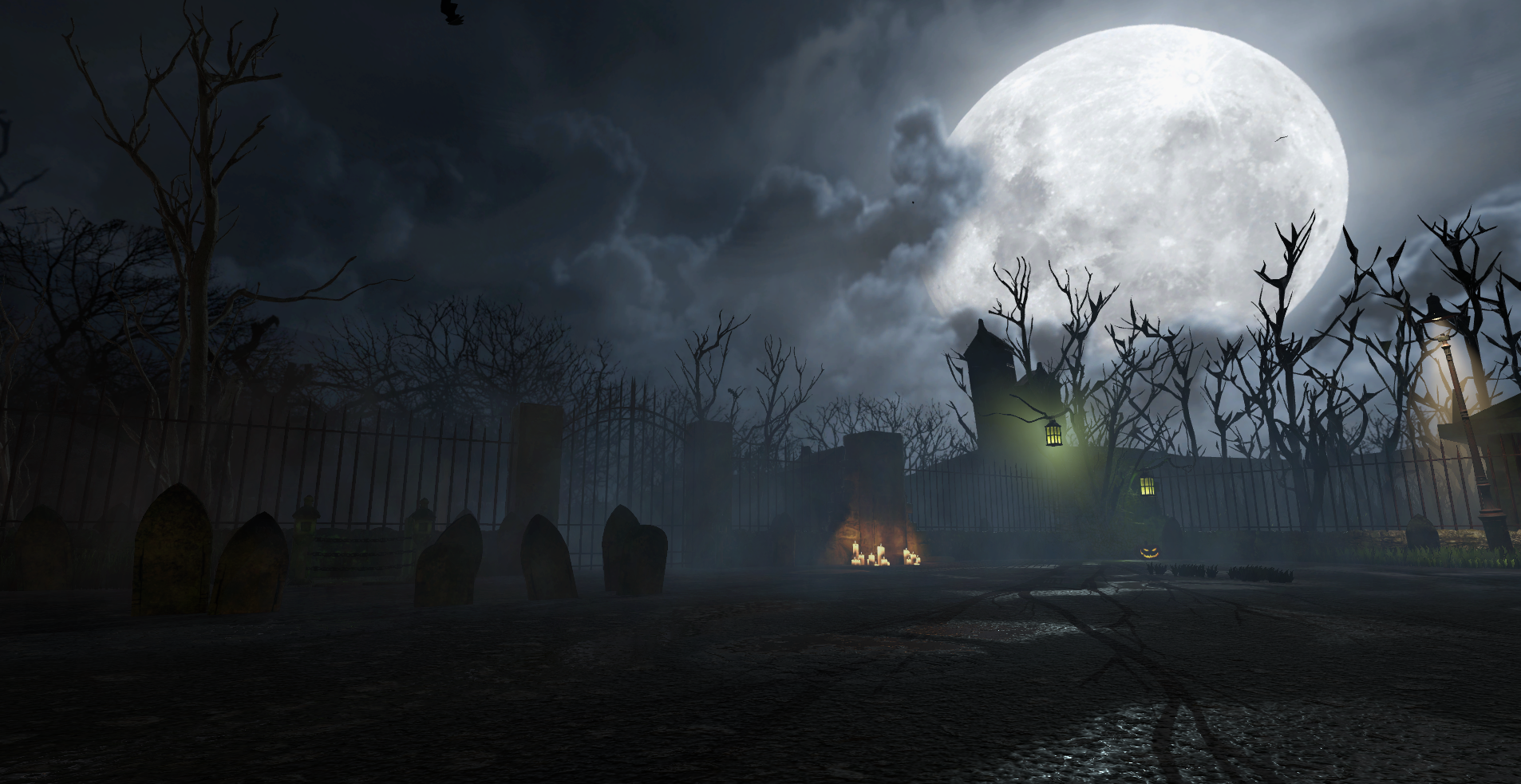 On to one of our favourite holidays - Halloween! Celebrate this spooky holiday with several elements added to the After-H Battle Arena game for the occasion:

Since we reworked the Zombie mode in After-H Battle Arena, we're happy to see that the feedback was very positive and that the game mode continues to appeal to experienced players. Therefore, we're continuing to work on refining the new base. One of the things we noticed, is that the zombies tend to go to the center of the map first by default,(even if there were no players) and then attack players. This resulted in the zombies blocking each other, which led most zombies to be stuck in the center of the map. In order to make the game more challenging, we've removed this behavior so that zombies will attack a target directly when it spawns, without necessarily going through the middle of the map.

Also, we have adjusted the zombie spawning zones on the different maps to reduce 'spawn clash' between the zombies and the players.

Following the players feedback and lots of playtests on our side, we have made some changes on the maps, Ceres and Artefact.

In order to have better balanced weapons, we've reviewed the statistics of the MX-42, Needle and T1 GAUSS guns:

We have slightly boosted the MX-42 body damage to make the gun more effective at short and medium range.

The Needle has been a little too popular to be used as a short range weapon, therefore we decided to lower its fire rate ever so slightly.

We have made the T1 GAUSS more effective at short range body shots but its overall power decreases drastically after 3 meters.

These changes will consolidate a base as we continue to make adjustments regularly over time.

Firing a grenade could be alot faster now, thanks to our newly added 'quick shot' feature. To do so, you just have to press and hold the weapon change button and then pull the trigger  at the same time.

This "quick shot" feature is an addition to the existing way of firing the grenade, which is to hold down the weapon change button for a few seconds for the "trajectory projection" to appear and then press the fire button.

This means players can now fire a grenade quickly without the "tutorial" for quicker gameplay, or, choose to use the "trajectory projection" for a perfect shot if necessary!

Switch between weapons is no longer immediate!

Before this update, it was possible to fire with the weapon you were switching to immediately. This tactic was used a lot and was very powerful, especially with some weapon combos like, Needle and T1 Gauss. In order to favor game mechanics so that they're based more on team tactics and how the weapons are handled, we added a 0.4s delay on the weapon switch (This means that it is not possible to shoot before 0.4 secs, which is also the time for the weapon to materialize).

We took advantage of this update to bring some new elements/modifications on the game experience:

In this section, we will list everything that we have fixed from the previous update:

Would you like to keep updated with more EVA updates? Follow us on social media here for the EVAs' latest news: